GIFs Are For Boomers 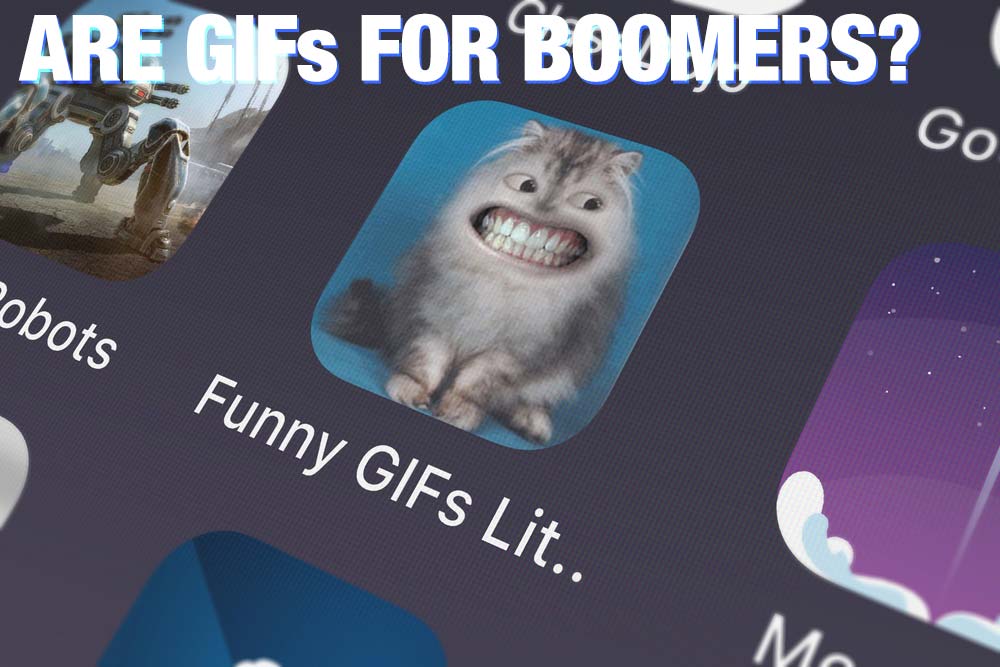 Are GIFs really for Boomers? Are they as cringe-worthy as Gen Z says they are? You decide!

For the record, the whole "GIFs are for Boomers" thing most likely originated from a Vice article. However, even Giphy. a website that is the internet's primary source for animated GIFs (which are short clips of various media bits that can be used to animate text or just to basically make something more interesting) stated that the GIF may be "out of fashion".

The GIF has been used by people over the years to add a little bit of humor to their blogs and other online publishing platforms. However, after years of being popular it appears as though Gen Z has taken over - and with them come new ways to communicate on the internet. In fact, Giphy says that those numbers are slowly declining as Gen Z continues its takeover of the world wide web.

GIFs Are Now Cringe... According to Gen Z Internet Users.

Giphy's core business model comes in the form of an online search engine that allows its users to search for and share animated GIFs, which are often used as a shorthand for humor on social media. It is extremely popular but also fair to say that it has a limited shelf life: Giphy itself admits there is an “indication” of a decline in user interest in GIFs due to waning user interest, etc.

The Bittersweet Passing of Time

Is this truly the end of an era for GIFs? Gen Z seems to think so.

It felt like yesterday when gifs where ATH. pic.twitter.com/tDO59OVtRx

What Does Giphy Have To Say?

Giphy has used a recent trend to position itself as an expert in the field. In this case, that trend is gifs, which are "out of fashion" and viewed by young people as "for boomers," or cringe-inducing.

In the words of Giphy’s CEO, Alex Chung, the company is “an endangered species in that category and we need to find a different home to live”. A $400m price tag might seem steep for a business that has lost half its value in two years and which is struggling to compete against giants like Netflix and Facebook – but it also reflects how little appetite there is for gifs by investors. Given the lack of options, though, it may be hard for regulators to block this deal before someone else comes along.

Being an older Millennial, I don't know whether or not I should be insulted by this (I'm actually not), but I do think it's even more cringe and even hilarious that Gen Z classify anyone over the age of 30 as a "Boomer" nowadays. I know this is just one individual's opinion, but from personal experience as an older Millennial, I have been called a Boomer by Gen Z too.

seeing the gif responses and quote tweets to this are so funny, i love seeing you all pull out your ancient artifacts for show and tell 🥰

Back in 1987 tech bros were not really considered cool (you guys were just called "nerds"), but the GIF was. GIF, pronounced "JIF", is an image format developed by CompuServe in June 1987. It became widely used on the Internet, but also has many other applications such as saving screenshots in Windows. The format supports multiple bit depths, transparency, Internet & e-mail integration and more than two million colors. It can also store multiple images in one file with each frame having a different color table. I guess if technically if you were a tech bro in 1987, then you most likely are a Boomer (or an older Gen Xer).

So yes, technically speaking, "GIFs are for Boomers".

The internet has spoken and GIFs are officially considered cringe (by Gen Z). Not only does Giphy (whose business module is entirely about GIFs) believe that GIFs are going out of fashion, but the majority of Gen Z mock the use of GIFs as "for Boomers". This is why you may want to reconsider using GIFs on your social media pages depending on who you want to target with your social media marketing.

Then again, maybe your target audience are all Boomers (Gen X and older Millennials) who like cringe-worthy GIFs. If that is your business module and it's still working, then by all means keep at it until it doesn't work anymore. Seriously no one else is really talking smack about GIFs except Gen Z internet users. So do what you want, but realize that you will be judged no matter what you do!

Speaking of cringe... There is a restaurant chain whose sole business module was to insult the customer (Dick's Last Resort). I'm sure if your business module was like that, then feel free to post cringeworthy GIFs unapologetically on your social media page. Exceptions to the rules still exist. However, if you're NOT Dick's Last Resort, then you should really check out The best marketing tactics for bars, especially since most bars and restaurants are designed to have to play by the rules.

GIFs are not very performant on the web. They use lossy compression, which means that their file size is big and its decoding in the browser can’t be done as fast as on other formats. However, there is an alternative to GIFs that is better: video. It’s encoding is less lossy which means you can get a smaller file size while still maintaining good video quality.

From a technical standpoint, GIFs are usually much larger in size than videos, which translates to more data needs to be downloaded on a user's phone. That is why Twitter converts the GIF into a video, reducing the file size and allowing for faster loading.

HTML5 video can be used to reduce the size of GIF content by up to 98% while still retaining the unique qualities of the GIF format in the browser. Using video is a great way to increase user engagement and improve your website. Videos are faster, sharper and more engaging than GIFs, especially on mobile devices.

Consider Using APNG Instead of GIF

APNG (Animated Portable Network Graphics) is basically PNG, only animated. APNG can be a better alternative than GIF when it comes to animations because it contains 24-bit color and supports 24-bit transparency while the GIF only has 8 bit color and 8 bit transparency. While GIF files are great for quick animations, they don't have the same color or transparency options as APNG files.

The truth is... GIFs do not have to always be cringe. Although it's probably better (from a technical standard) to use other formats on your website instead. Motion graphics still have a big impact on marketing and design today. They can tell a story, evoke emotion, and make an impact with viewers. Motion graphics also allow for more interaction with your audience by bringing the product or service to life.

Although most designers agree that motion graphics are not necessary for smaller products such as websites and emails, they can still be used to support your marketing and design strategy for larger products like books, reports or seminars.

Using GIFs in digital marketing is still a good idea, as long as they are used tastefully and your file sizes are optimized so you don't have any technically issues. Just as long as you don't pull some stock GIF from Giphy and use it on your social media page thinking it will be funny. If you can create a GIF that is a simple animated image that can boost your campaign then by all mean do it. Just make sure to design it with tact and not cross the line into cringe territory. That being said, motion graphics can still be a great tool to use in marketing and design.

If done correctly, a GIF or any animated graphic can really enhance a website, email or social media post. The right animated image can turn something as simple as a blog post into an engaging experience that keeps users interested and engaged.

Daclaud is an award winning SEO and digital marketing consultant. He has a Bachelor of Science in Digital Marketing and has been practicing SEO, web development and social media advertising since 2009.

Are you looking to get massive traffic to your website? Find out how Archmore Business Web can help you get you MORE customers!

Check out the rest of the blog