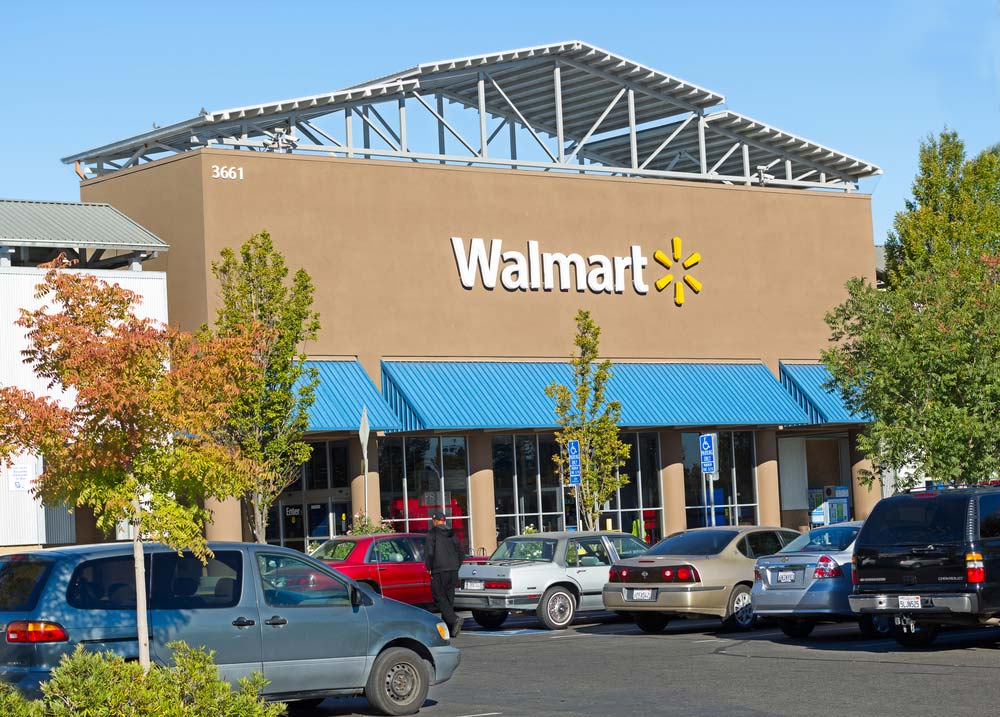 Happy Halloween, folks and welcome to our newest series for the end of 2022: Digital Marketing Horror Stories. This one is about the consequences of cancel culture and how you need to be politically correct with your content, or else you will get hunted down and cancelled!  The Twitter mob is relentless and they will burn you at the stake if they suspect you are a vampire or a witch (I'm only using these terms facetiously because this is a Halloween Digital Marketing horror article).

Our first SEO horror story takes place back in October of 2014 and it was a time when one of the largest retail store's web development or SEO team made the mistake of adding "fat girl costumes" as a category on their website. This incident caused quite a stir as the Twitter mob banded all the villagers together, brandishing their pitchforks and torches to hunt down the monster who offended them. This "monster" was (spoiler alert) Walmart...

2014 was a milestone for SEO professionals. It was the same year that Google launched it's Pigeon algorithm. It was also the same year that Walmart also came under fire for something that may have been either devilishly funny or maybe it was legitimately an actual search term. In any case, a dark and ominous cloud would spark controversy for Walmart faster than anyone could say "Nevermore". This was the dreaded "Fat Girl Costume" category on their website.

Named after a bird that is said to have a better sense of direction than its fellow birds, the Pigeon Algorithm provided more useful, relevant, and accurate local search results. Pigeon's technology is integrated into our existing ranking algorithm to produce results that are more useful: relevant local content is given preference in our search results, so that users get an even better experience when looking for things nearby.

Do Some Women Actually Search for "Fat Girl Costume"?

Yes, some women acknowledge that they are fat and they deliberately search for the keyword "Fat Girl Costume". It was 2014 and cancel culture really wasn't a thing yet. It could have been possible that these women just see the world as how it is. They are fat and they own up to the word. Therefore, they search for a costume for a "fat girl" (however you want to phrase it, but sometimes it's perfectly fine to just call a spade a spade without being offended).

Based on Google's Related Search results (conducted in October 2022), it appears that people do indeed search for "Fat Girl Costumes". So this is a legitimate keyword that people are searching for, which is why Walmart was technically not in the wrong for optimizing their website for that keyword (at least in my opinion as an SEO professional). 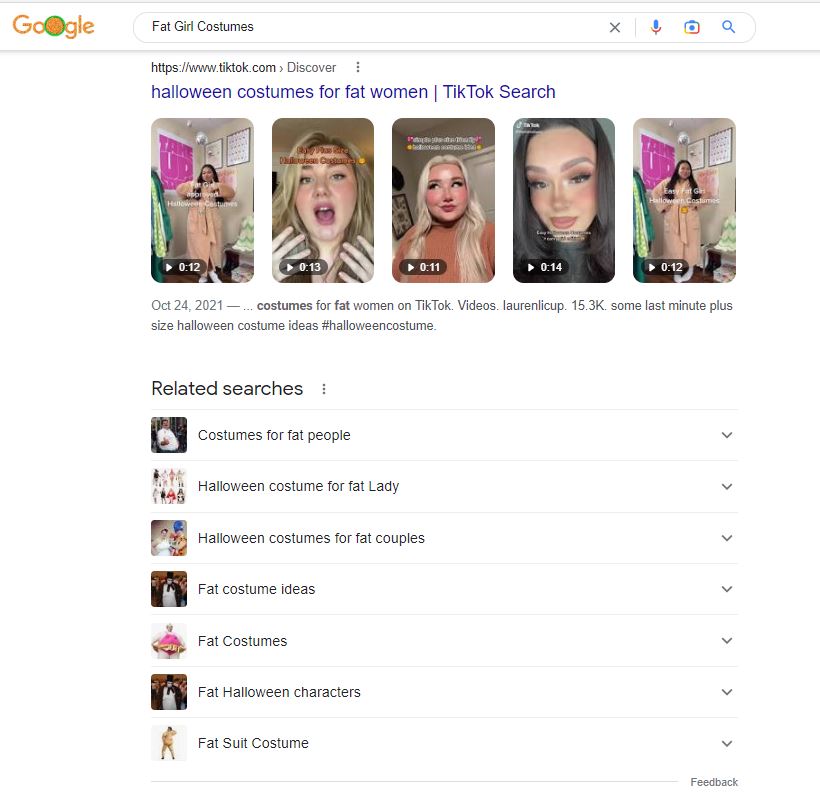 Fat Girl Costumes: An Honest Mistake? Or Something Sinister?

Whether the intention was to shame fat women or if the SEO team was just trying to optimize their website for "Fat Girl Costume" is not known. In Walmart's defense, "Fat Girl Costume" is a legitimate keyword that often trends each Halloween. It could have been possible that the SEO team was just unaware of the potential backlash it would have at the time. 2014 was during a time when we were culturally just transitioning to the "woke" culture that is so prevalent in the 2020's. It could have just been done out of pure ignorance rather than with malicious intent.

According to an article on Vox; before 2014, the concept of "woke" was relatively unknown.  Back in the early 2010's the concept of political correctness and cancel culture was still a rather new to our society. Nowadays there are many words that would offend people and "fat" is obviously one of them. I am not really a social scientist, but as an SEO professional, I understand that we have to be aware of the power of social media platforms such as Twitter. One wrong move could easily cause a lot of backlash, but luckily Walmart was able to rebound from this.

Not surprising, there was an outrage on Twitter over Walmart's "fat girl costume" category. Once again, this was 2014, so it was way before "cancel culture", so no one really called for the boycott of Walmart. People were more or less just expressing their anger over the issue.

.@Walmart Not sure labeling these as "Fat Girl Costumes" is the best approach. #rude http://t.co/UbDq6BpArv pic.twitter.com/SE5BjOUPFs

Are you effing KIDDING me, @Walmart? A section for "fat girl costumes"? WHAT THE HECK IS WRONG WITH YOU PEOPLE? #rude #inappropriate #haters

But much more sinister... A year before Walmart, Target's SEO department thought it was funny to change the name of "heather gray" to "manatee gray" for women's plus size dresses. This was a Tweet from 2013 describing one woman's outrage. I think whoever was doing the website at Target was having a bit too much fun. It seems like it may have been some recent graduate who just got the job or something like that (I only speculate this being the case, because uploading product content is just basic data entry, and this is often an entry level job). I'm sure whoever was responsible for this does not work for Target anymore.

What the. Plus sized women get "Manatee Grey" while standard sizes are "Dark Heather Grey." @Target #notbuyingit pic.twitter.com/nzHNYoytnp

Target Really Messed Up That Time

I can't defend Target's actions. Deliberately misnaming a color was just entirely unprofessional and uncalled for. Walmart's "fat girl costumes" category may have just been done out of pure ignorance and might have just been an honest mistake, but I can't say the same for Target. Whoever was responsible for the product content at Target seemed to have a very juvenile and immature. This was definitely intentional on the data entry person's part. Manatee Gray (unlike "fat girl costume") definitely has no SEO or keyword value. You could even argue that one was legitimate fat shaming and the other was an honest mistake.

“He who fights with monsters should look to it that he himself does not become a monster... when you gaze long into the abyss the abyss also gazes into you” - Friedrich Nietzsche

Almost a decade had passed since Walmart's Fat Girl Costume controversy, but it seems like the company just hired Whitney Way Thore, star of My Big Fat Fabulous Life on TLC, has signed on to be a feature in Walmart's Spring apparel campaign. The twisted irony is that this show actually included the word "fat" in the title. Sometimes it makes me wonder whether or not the Twitter mob are really the monsters?

Don't Let Your Get Targeted For a Witch Hunt!

Fire is bad... and so are pitchforks! Just ask Herman Munster. Don't let the Inquisition and Monster Hunters to burn your website at the stake!  If you don't want your website or brand to become the monster of this SEO horror story, then make sure your content is on point and make sure you hire the right SEO professional who is not going to let your turn into a werewolf during the next full moon. Archmore Business Web is the cure to your website's lycanthropy! Our digital marketing professionals will audit your website to make sure everything is on point and you don't have any content that might be offensive and we will optimize your website for the right keywords without offending the Twitter mob!

Wanna read more? Go for it!